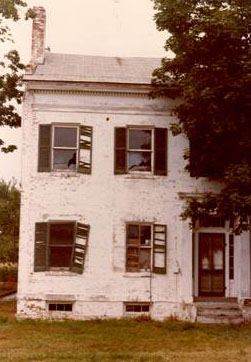 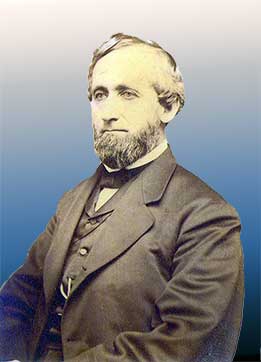 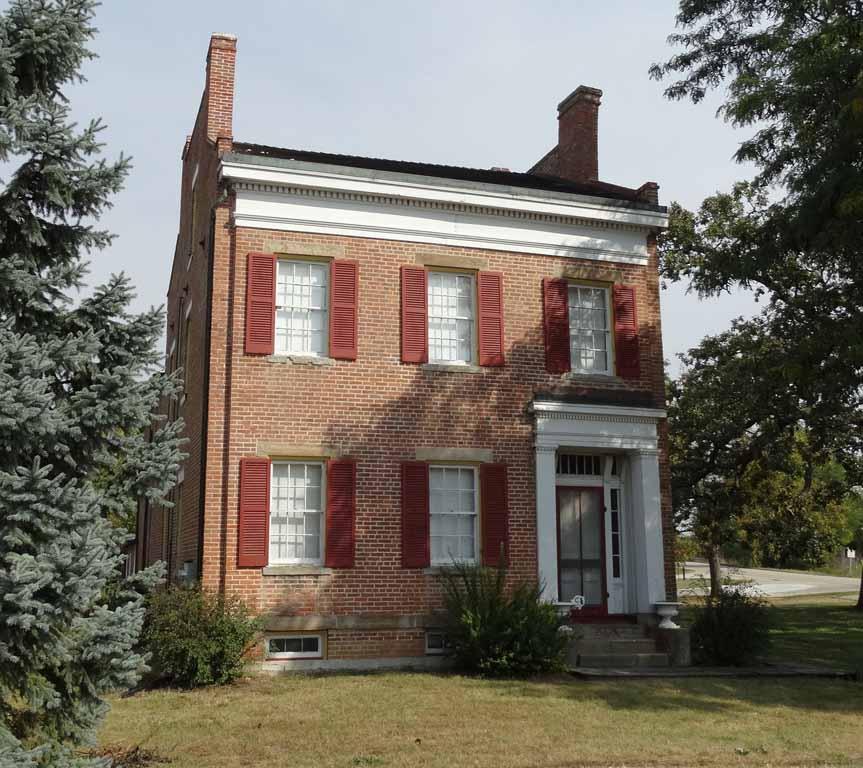 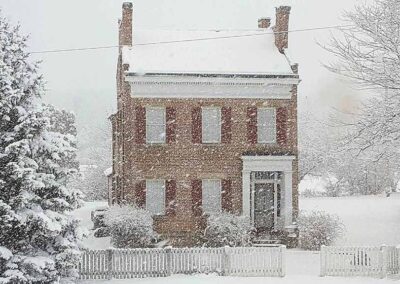 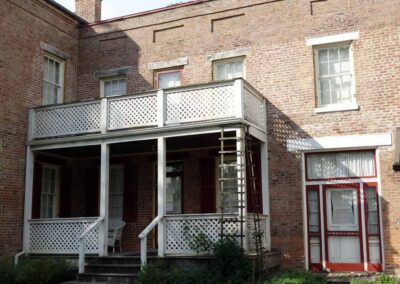 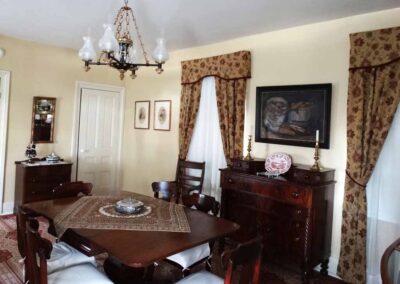 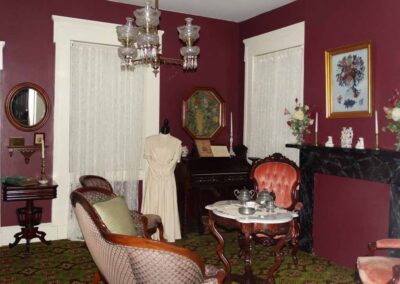 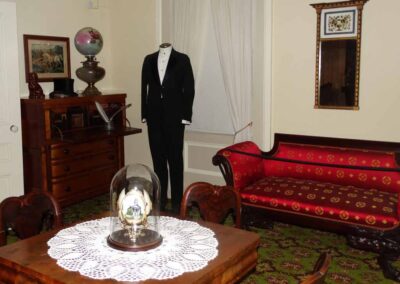 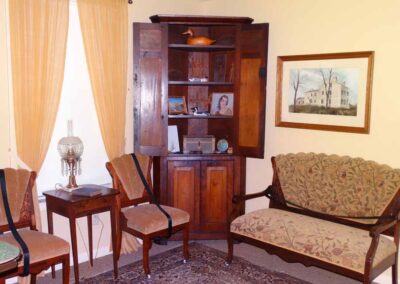 Pulsifer House is a Federal/Georgian townhouse with Greek Revival interior built-in 1844 by Edward F. Pulsifer and listed in the National Registry of Historic Places. The Putnam County Historical Society restored the house, furnished it with period furniture, and maintains it as a historic house museum.

Edward F. Pulsifer (1813-1902) and Sidney Pulsifer (1817-?) were brothers born in Vermont. They migrated west in their twenties. Edward married Mary Brown (1820-1891) of Middlebury, OH.  Their son Charles Augustus (1838-1929) was born in Ohio, their daughter Mary Frances (1840-1916) in Hennepin.  The brothers were attracted to Hennepin, which was only established in 1832, because of its central location on the Illinois River. They thought that establishing a business in Hennepin would put them at what they hoped would be the shipping and transportation center of the Midwest.

The brothers conducted business under the name E.F. & S. Pulsifer, Forwarding & Commission Merchants & Dealers in Dry Goods, Hardware & Groceries. The first entry in their ledger is for April 15, 1838. As their business prospered they expanded into real estate, grain, and shipping.

Edward bought out the business in1851 from his brother Sidney for $4,190. However, when the railroads failed to come to Hennepin, it became clear that Chicago was going to be the commercial center of the Midwest. Edward moved to Chicago during the Civil War and became a partner in the Chicago, St. Louis Transportation Company. He was a successful businessman in Chicago and by the time he died he was a vice-president of Union Trust Bank, a director of Commercial National Bank, and the owner of considerable real estate.

William Thomas purchased the home in 1904.  He and his descendants retained ownership until 1979 when the Porter family deeded the one-half-acre lot and house to the Village of Hennepin.

The Putnam County Historical Society took on the challenge of restoring the house and returning it to its former elegance. Pulsifer House was listed in the National Registry of Historic Places in September 1979.

Pulsifer House is a brick Federal/Georgian townhouse with a Greek Revival interior. A local carpenter using readily available pattern books or builder’s guides probably built the house. Windows and chimneys were placed for perfect symmetry on the exterior, including four fake windows on the east covering the wall where the front stairway is. There is an attached frame carriage house. Edward Pulsifer probably wanted to show more class on the front of the house by placing limestone window sills there.  The sills on the remainder of the house were made of wood and the originals only had to be replaced in 2019.  Limestone for the foundation was probably quarried locally and the brick was probably kiln-dried on the site.

The brick structure has two distinct components. There is a two-story south section that served as the family living quarters, and a narrower two-story “Beverly L” section with a roof sloping in one direction extends to the north. The south portion of this “Beverly L” section has an east-facing porch for entry to the dining room. The north portion has a lower floor and east-facing entry with over-lights and sidelights. This was Edward Pulsifer’s River Shipping Office.  A summer kitchen (to reduce the risk of fire) was added in the 1850s.  The outline of the summer kitchen can be seen on the exterior west wall.

Although we have none of the original furniture from the house, which went to Chicago with the family, all the interior woodwork is original.

The windows on this room distinguish it from the rest of the house.  Over-lights and sidelights are very old and very Federal. The sidelights open for ventilation.  Mr. Pulsifer’s River Shipping Office was more accessible to customers at ground level.  Another clue that this was his office was that the east entrance to the dining room was a shuttered door, steering customers to the River Shipping Office.   The color of the woodwork is the original green.  The Putnam County Historical Society business office was moved here in the fall of 1988.

The dining room was a kitchen and dining area until the summer kitchen was built in the 1850s.  The dining room is in the Beverly L section of the house.   The east entrance door to the dining room was shuttered, possibly to encourage Pulsifer River Shipping customers to use the office door.  Doors on the south wall leading to the basement and servants’ quarters on the second floor.  It is believed that the second door to the office was added when the summer kitchen was built.   The fireplace is a “fake” with a stovepipe hole about 5 feet above the mantel to accommodate a heating stove. Window placement is to achieve perfect symmetry on the exterior.  Long panels in the doorway between the dining room and the ladies’ parlor are called fielded panels – a very unusual door.  All woodwork is either white pine or fir and always painted.  The doors are called Christian Doors due to the molding making a cross and reverse double-cross.  A dining room quite apart from the summer kitchen indicated affluence.  The carpeting is “in grain reversible” and was woven especially for this home in Pennsylvania. It has historically accurate, color and pattern.

The fireplace makes it an ideal place where the ladies had tea and conversation after meals.  The carpeting was woven in England and copies the colors and designs used in the Empire period.  The woodwork is original and stately Greek Revival. Most of the furniture came from a Hennepin home of the same time period as Pulsifer House.

(Possibly a child’s room or a bedroom)

No one has established the original use of this room.  The Society uses it for a research room and library.  Originally there was a closet on the south wall.  Also a stovepipe hole was found on the west wall near the ceiling.

Men retired to this parlor after a meal where they smoked cigars, visited, and drank brandy.  All fireplaces throughout the house would have had stoves in front of them like the Franklin stove in this parlor.  All the fireplace mantels were wood with faux marbling. This was “progress” and unusual for a home on the prairie in 1844.  Since Pulsifer was in the river shipping business, he could acquire items for the home that other pioneers would not have.  All the windows throughout the house are 6 over 6.  None of the windows are original; all were replaced the first year of the restoration.

The front entry has sidelights and overlights. Each step of the stairway has Greek Revival detail on the side.

The two bedrooms are identical in size to the parlors below. The placement of the windows and fireplaces also matches that of the parlors.  Two closets upstairs were rare in 1844.  Candles were the first form of lightning.  Later oil lamps were added.  There is an oil line groove visible on the bedroom floor.  The small room off the second bedroom could have been another bedroom or a child’s room.

The servants’ quarters can be reached from the dining room or a step down from the second bedroom upstairs.  The servants’ quarters consist of three small rooms.  The first room has a door on the east that opens out to the roof of the east porch. These three rooms were a small apartment for a caretaker at one time but have since been returned to use by the Society.

The attic is a pleasant room over the entire primary portion of the house.  It has two windows on the east and one on the west making it airy and light.  Pegs hold the beams together.  Walnut boards some 20 and 22 inches in width make up the flooring.

The limestone foundation is in excellent condition and for that reason, the restoration was promoted by the State.  The limestone was probably quarried locally.  A new basement floor was poured in the summer of 1988 after the 1930’s cistern was removed.  The basement is the size of the entire house except for the River Shipping Office.

A complete restoration of the carriage house took place in the summer of 1988 with the original siding on the east wall.  Historic architects think this may be one of the oldest wooden structures in the State.   Evidence indicates that it was original to the house from the way it was attached to the north wall.  The smaller door on the north end is where the horses entered and the large double door was the carriage entrance.  Historians feel that the raised platform on the south is where the Pulsifers laundered their clothing and where they placed the toilet.  Evidence on the original wood siding proved to be the red that it is now as well as the color of the shutters.

Evidence of a brick smokehouse is on the west lawn, a few feet from the carriage house.